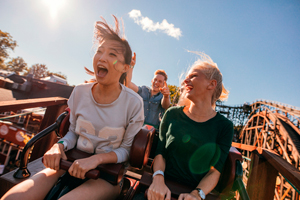 Children, teens, and adults are excited to go to amusement parks. Residents from Palm Beach County and throughout the State of Florida enjoy roller coasters. Water slides are refreshing on a hot Florida day. Go-Karts raise your spirits as you challenge your family and friends to a contest of speed and skill. The haunted house is always a go to attraction where guests shriek, scream and laugh, especially during Halloween Horror nights. An amusement park brings fun and laughter to most, but there are some whose fun experiences are marred by misfortune. In Florida, more than 20 million people visit amusement parks throughout the year and there are thousands of guests who are injured, some resulting in death.

If you or a family member are injured at an amusement park, you may have a negligence or product liability claim against the amusement park, the manufactures of the ride, and possibly others.

An amusement park accident attorney may bring a legal action on your behalf for any injuries suffered while at a park, carnival or fair. A qualified personal injury attorney will review the facts, investigate the cause of the accident, hire any experts necessary to ensure that you receive financial compensation for your injuries.

If you are injured and need assistance contact the Law Office of Roger P. Foley. We represent individuals injured at amusement parks throughout the state of Florida. Call now! (561) 746-7076

The International Association of Amusement Parks and Attractions (IAAPA) provides injury statistics on participating amusement facilities. The problem is all amusement parks do not voluntarily participate so statistics given do not paint the complete picture of the amount of actual injuries that occur. In the years 2020 and 2021, injury statistics are much lower than prior years due to parks being closed because of Covid-19.

According to Florida law, there are numerous safety guidelines that need to be adhered to, as well as, routine inspections that are conducted at amusement parks, carnivals, festivals, theme parks, trampoline parks, and fairs but injuries still occur. Those injured range in age from elementary school children to senior citizens. Many of those injured suffer traumatic injuries and sometimes death. However, statistics from IAAPA state that your chance of being seriously injured at a permanent site (on a ride) in the U.S. is one (1) in 15.5 million. Florida distinguishes amusement parks into two categories: temporary and permanent amusement rides.

There are two types of amusement parks and they are regulated differently:

Injuries to guests vary from minor to severe. Below are the types of injuries that can occur at amusement parks.

With safeguards in place to keep rides safe, it is rare that an injury occurs, but it does happen. With any machinery there is always the possibility of errors that can occur.

List of Fairs and Carnivals in Palm Beach County

Does The State or Federal Government Regulate Amusement Park Rides in Florida?

Mobile parks, like carnivals and fairs are governed by state statute and overseen or regulated by The Florida Department of Agriculture and Consumer Services (FDACS). Permanent parks like Disney and Universal are not regulated by the federal authorities.

If you were the victim of an accident based on a manufacturing or design flaw, you may be eligible to file a product liability claim. If there is an inherent design flaw then your claim is against the manufacturer for producing a flawed design. In order to be successful in a claim or lawsuit, it must be established that a certain part(s) or piece of equipment on the ride was defective and was the cause of the injuries suffered.

As a guest at an amusement park it is expected that the rides and attractions are safe. When a visitor is injured due to a flawed or defective part or product, it is known as a products liability case. Product liability cases are under the general umbrella of personal injury law. If successful, the victim will be financially compensated for their damages.

When legal action is brought against an amusement park, they will do their best to minimize paying out for the damages incurred by the plaintiff. Here are some common defenses:

This may lead to comparative negligence offset wherein the value of the injury is diminished by the percentage of fault assigned to the rider/victim.

Personal Injury
Video Center
View More
Client Reviews
★★★★★
I was charged with Domestic Violence few years ago and I was referred to Roger Foley from a family member! Roger is a BULLDOG! He was great ... Thomas
★★★★★
My wife (Mother of Stepson) and I Hired Mr Foley to represent my stepson in a minor criminal case. We would highly recommend ... Steve
★★★★★
Roger P. Foley got me reinstated. Also he got my COS waived, and got me to still be terminated off of probation on my expected termination date ... Jamar
★★★★★
Roger is a very compassionate person, he truly cares about his clients. He helped me with my case and was there for me every step of the way ... Cassandra G.
★★★★★
I think your firm did a great job on 3 cases that were 28 years old. The results are better than expected. I truly appreciate the hard work that ... Jim
View More
Submit a Law Firm Client Review