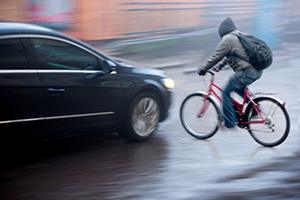 Florida’s nickname is the Sunshine State. The sunny weather allows for many activities, one of them is bicycling or bike riding. People of all ages enjoy riding a bicycle. Kids often ride their bicycles to their friends house. Siblings may race each other up and down the street. One person may commute to work while another enjoys the fitness aspect of bicycling. Many people in West Palm Beach and throughout Palm Beach County carry their bicycles to the beaches to enjoy the scenery. Unfortunately, many motorists fail to acknowledge bicyclists and a serious accident occurs. What started off as a beautiful day to go for a ride turns into a traumatic bicyclist accident. The bicycle crash often results in serious bodily injury or death.

Pursuant to the laws of Florida, bicyclists have the same rights as other motorists. Bicyclists are required to follow the same traffic laws. Riding a bike is an enjoyable, fun and healthy way to enjoy one’s day. Unfortunately, when bicycling accidents occur there are physical injuries and/or death. The impact on the injured party and their family is devastating. The accident has altered their lives for the worse and the accident can’t be undone; the injuries or loss of life are permanent. Justice is acquired by receiving compensation through an insurance settlement or via trial.

Cyclists suffer from serious bodily injuries or are fatally injured when they collide or crash with any motorized vehicle, car, truck or bus. Most bicyclists wear general clothing with a bicycle helmet. You will not see a bicyclist wearing any additional protective equipment. Accordingly, the bicycle rider has no barrier of protection when they are in a wreck with any motor vehicle.

What Are The Main Causes For Bicycle Accidents?

Bicycle Accident Not Caused By Other Motorists

Bicycle accidents are not only caused by the negligence of other drivers on the road, bicyclists can also be fatally or seriously injured due to other types of negligence. Other factors that may negligently cause a bicycle rider to fall and suffer injuries are:

If you are an injured bicyclist and believe that your injuries are caused by the negligence of another, contact the bicycle accident attorneys at the Law Office of Roger P. Foley, P.A. at (561) 746-7076.

The vast majority of bicycling accidents conclude with the rider on the ground. Injuries vary greatly from a scuffed knee to death.

Statute Of Limitations On Bicycle Accidents In Florida

The statute of limitations in Florida for Bicycle Accidents is:

When a driver is not deemed to be completely at fault for the accident and the bicyclist shares some of the fault, the principle of comparative negligence will be applicable. A bicyclist may be negligent for failure to adhere to traffic laws, for example they may travel on the wrong side of the road or ride through a stop sign.

If the bicyclist is deemed one hundred percent at fault then they will be unable to recover any financial compensation for their injuries.

How Long Will It Take For Me To Receive Financial Compensation For My Bicycle Accident Case?

Each case is different. In some cases you may receive a settlement within the first 60 days and others may take a year or two. It generally depends on three factors:

The cyclist accident attorneys at the Law Office of Roger P. Foley will work at a fast pace to get you paid. It is important that we properly investigate any and all responsible parties so that you can achieve maximum payout on your claim. Insurance companies often offer pennies on the dollar and deny liability. The process of negotiation with the insurance company can be complex, especially with issues of comparative negligence. If they do not settle, a lawsuit will be filed and the case will head to trial. We have offices in West Palm Beach and Fort Lauderdale and accept bicycle accident cases in Palm Beach County and throughout the Sunshine State.

How Can A Bicyclist Avoid A Bicycle Crash?

According to the National Safety Council, there are several preventive measures that bicyclists should follow to minimize the possibility of being involved in an accident or crash:

Follow Traffic Laws and Be Aware of Your Surroundings

How To Determine Liability In A Florida Bicycle Accident?

Ascertaining who is at fault is paramount in a bicycle accident case. There must be negligence on the part of another party for there to be a personal injury claim or lawsuit.

Examples of Bicycle Accident Cases ( When negligence is clear) In Palm Beach County include but are not limited to the following:

To Prove Negligence In A Bicycle Accident, The Injured Party Must Prove

Am example of the principle of negligence:

A bicyclist is traveling southbound on Dixie Highway toward Palm Beach Lakes Blvd when a blue Chevy Tahoe increases speed to overtake the bicyclist and while passing the Chevy fails to leave sufficient space and turns into the cyclist. The bicyclist crashes into the side of the vehicle causing the rider to be thrown over the handlebars and into the roadway causing a fractured skull, broken arm and ankle, along with road rash.

The injured bicyclist contacts the West Palm Beach bicycle accident attorneys at the Law Office of Roger P. Foley. The accident lawyer reviews the accident report and notes that the Chevy had a duty to adhere to traffic laws as evidenced by the report and traffic citations that the driver received for improper passing and improper turn. It is clear that:

Your West Palm Beach Personal Injury Attorney will contact the Chevy driver’s insurance company to acquire a copy of the coverage provided to their insured. The attorney will prepare a demand package based on the insurance available, and the types of damages applicable.

Discuss the particular facts of the case with your Palm Beach Accident Lawyer to determine whether punitive damages are applicable in your accident case.

Are Bicyclist Accidents Covered By Insurance?

Generally, if you are involved in a single person bicycle accident, automobile insurance will not apply. However, if the accident involves a car, bus, or truck and that party's negligence is the cause of the accident, the driver’s insurance will likely be available to pay for damages. If the bicyclist also has automobile insurance, they will likely look to their Personal Injury Protection ( PIP) to pay the first 10k of medical bills. After PIP, if liability is clear, the injured bicyclist will seek damages through the insurance policy of the at fault driver.

Contact The Bicycle Accident Attorneys At The Law Office Of Roger P. Foley

The attorneys at Roger P Foley have readily available to assist you in your accident case. You will always speak with an attorney. You will not be shuffled from department to department, we work diligently to ensure that your case receives the one on one attention it deserves. Our number one goal is client satisfaction. That means we will be by your side during the process and work to acquire you the maximum compensation that you deserve. Contact our West Palm Beach bicycle accident attorneys today at (561) 746-7076.

Personal Injury
Video Center
View More
Client Reviews
★★★★★
I was charged with Domestic Violence few years ago and I was referred to Roger Foley from a family member! Roger is a BULLDOG! He was great ... Thomas
★★★★★
My wife (Mother of Stepson) and I Hired Mr Foley to represent my stepson in a minor criminal case. We would highly recommend ... Steve
★★★★★
Roger P. Foley got me reinstated. Also he got my COS waived, and got me to still be terminated off of probation on my expected termination date ... Jamar
★★★★★
Roger is a very compassionate person, he truly cares about his clients. He helped me with my case and was there for me every step of the way ... Cassandra G.
★★★★★
I think your firm did a great job on 3 cases that were 28 years old. The results are better than expected. I truly appreciate the hard work that ... Jim
View More
Submit a Law Firm Client Review