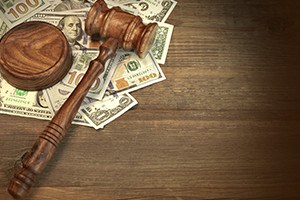 When a person is arrested, typically a bail amount will be set by the court, which the arrestee will have to pay before being let out of jail.

Examples of Bail or Bond Why do Courts Set Bail Amounts?

How Does Bail get Set?

The law requires that you see a Judge at a court hearing called “First Appearance” within 24 hours of arrest. This First Appearance hearing is the first time you will be in court regarding your case and a bail amount will be set at this time. Some amounts are discretionary, while others are set by using a scheduled list already predetermined by the Judge.

How is Bail Posted to the Court?

Bail can be posted in two different ways:

How Does a Bondsman Work?

A bondsman is often used when the bail is higher than the accused individual can pay at that particular time. The charged individual, the arrestee, typically pays 10% of the total bail amount to the bail bondsman as his fee. For example, if your bond is $1,000.00, you will give the bail bondsman $100. You will have to collateralize the remaining amount of the bond. The means if your bail was set at $1000.00, you have to give or pledge to the bondsman something valued at $1,000.00. The bail bondsman will then post the full amount of your bail. Once your criminal case is over, assuming you have not failed to appear at court, fled the jurisdiction, or otherwise forfeited your bond, the bondsman will return your collateral. Bondsmen commonly return your collateral, money, or items of value within a week of receiving notice from the court

If you do not use a bail bondsman, you will receive all of your posted bail back from the Court at the conclusion of your case only if your case is dismissed. A plea of No Contest is not a dismissal, and the Court will be able to deduct costs, fines, or other charges from the amount you have posted. It will be weeks or even months before the remaining cash is actually returned.

How Much Will Bail Be?

If the crime you are charged with is on the “bond schedule” list, the First Appearance Judge simply looks at the list to determine the amount. For instance, the bond amount for a first DUI without property damage or breath enhancement is $500; the predetermined bond amount for Grand Theft is $1,000. DUI and Grand Theft are common crimes and the bond would automatically be set using the scheduled bond list. In most misdemeanor cases, excluding domestic violence, the bond is between $500 and $2,000 and usually less than $5,000. In more serious cases, such as felonies or domestic violence, the amounts of the bond increase in proportion to the severity of the charges. The Judge has discretion in setting the bond amount and can raise or lower it.

Do I Need an Attorney for a Bond Hearing?

It is in your best interest to have the help of an experienced lawyer when you are set to go to a bond hearing. If the bail set at this hearing is too high for you to post, you will remain in jail until your trial. As an experienced criminal defense law firm, we may be able to help reduce the bail amount or eliminate it completely.

If a friend or family member is in custody and their bond is too high, call us to discuss filing a motion to reduce that bond.