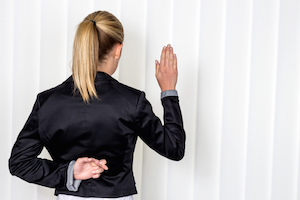 Have you ever seen in the movies a witness being sworn in to tell the whole truth and nothing but the truth? The reason behind this is people need to have reliable evidence to make decisions. This same reasoning goes long back in time even to the book of Proverbs in the Bible. “A truthful witness saves lives, but one who breathes out lies is deceitful.” Proverbs 14:25 (ESV).

There are times when a person is not lying but is incorrect in their facts or has a mistaken memory about what went on. The information that was supplied to them was incorrect or they misunderstood what was being asked. There are many situations too numerous to discuss about where a person could have incorrectly spoken about something and is being now charged for perjury.

This page will be talking about the crimes of (1) committing perjury in a proceeding and (2) perjury by contradictory statements.

The prosecutor can charge each different false statement that was made under oath as a separate crime.

Defenses to Perjury in a Proceeding

During the proceeding, the defendant’s recantation of the previous statement can be used as a defense if:

People sometimes forget things in the past and change their minds as they are speaking. Other times people become convicted about telling a lie and decide to tell the truth. This defense protects those two types of people.

Punishment for Perjury in an Official Proceeding

If the perjury was committed before anyone of these proceedings, the defendant committed a third-degree felony which is punishable up to 5 years in prison and a $5,000 fine. This crime is ranked as a level 4 out of 10 under the Florida Criminal Punishment Code.

If the perjury was committed before the prosecution of a capital felony, the crime is a second-degree felony which is punishable up to 15 years in prison and a $10,000 fine. The crime is ranked as level 8 out of 10 under the Florida Criminal Punishment Code.

Punishment for Perjury not in an Official Proceeding

If the perjury was committed not in an official proceeding, the crime is a first-degree misdemeanor which is punishable up to 365 days in jail and a $1,000 fine.

Florida Statute 837.021 prohibits anyone from making contradictory material statements in an official proceeding under oath.

The state must prove beyond a reasonable doubt:

The prosecutor does not have to prove either statement was not true but that the statements were contradictory. Was the guy dead or alive? Were the emails completely destroyed or were there back-ups?

Another defense is that the individual believed both statements to be true at the time the statement was made. For example, Sam first said the victim was dead, but later talked to Carl who said he saw the victim moving, and Sam changed his belief about the victim. Sam was not committing perjury but was merely stating his belief. Perjury is intentional and knowing, not mistaken.

If you have been convicted of perjury, call our offices. Our attorneys are available to meet you for a free 15 minute case strategy. It is important that we know all the facts. We need you to tell us everything. This information will be critical to putting together a defense strategy for your case. Our attorneys will find out what evidence the prosecutor has against you. We will then inform you of your options on how to proceed with the case. We can take the case all the way to trial, if you want. Call today so we can get to work helping!