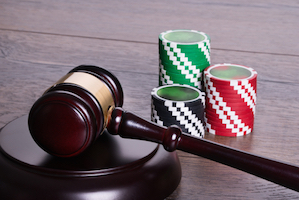 Many Floridians have heard of the Florida Lottery and think that because it exists, any type of lottery is allowed as well. This is where they are wrong. Florida Statute 24.102 allows a department of the State of Florida to run a lottery while Florida Statute 849.09 makes it illegal to do many things that are associated with a private lottery. This is one of those situations where if you do it, you go to jail, but if the government does it, it is “OK”.

A "lottery" is a game of chance in which smaller sums of money or things of smaller value are risked for the chance of getting money or property of greater value upon the happening of an uncertain event.

Other things that are considered lotteries are: (1) pyramid lotteries where people pay a fee to be part of a club and subsequent members fees go to the referring members, (2) chain letters lotteries, and (3) referral selling lotteries. Bingo is not a lottery and Bingo is governed under Florida Statute 849.0931; however, if one attempts to do Bingo and does not do it according to 849.0931, then it would not be considered Bingo, but a lottery. Also, a lottery is not a game promotion that is used in connection with and incidental to the sale of goods. For example, a fast food restaurant chain creating a game, where you buy a milkshake that comes in a cup with a peel-off tab, which could be worth free food or money, is not creating a lottery.

This part of this page will briefly explain some of the crimes listed under this section.

The statute prohibits anyone from setting up, promoting, or conducting a lottery for money or for something of value. Mere possession of tickets or records is not enough to be charged under this part of the statute; however, possession of the tickets or records is enough for a conviction under other areas. The prosecutor has to prove that the defendant actually participated in the lottery.

To convict a defendant of this crime, the state prosecutor has to prove the defendant participated in setting up, promoting, or conducting a lottery.

Anyone convicted of this crime commits a level 1 crime under the Florida Criminal Punishment code. It is a third-degree felony, which is punishable up to 5 years in prison and a $5,000 fine.

Florida Statute 849.09(1)(b)- Disposing of Money or Property by Lottery

This charge is directed at the “movers” behind the lottery and not the “pawns” used to help conduct it. This person is a leader and not a follower.

It must be proved that the defendant had an interest in or control of the money or property and he caused it to be disposed of by a lottery conducted under his authority, direction, or supervision. Mere ticket selling, keeping records, collecting tickets, or determining who the winners are is not enough to show the defendant was the real “mover” behind the lottery, but those actions can still be charged under other parts of the section.

This crime is ranked level 1 out of 10 under the Florida criminal Punishment Code. It is a third-degree felony punishable up to 5 years in prison and a $5,000 fine.

This part of the statute is trying to prevent a person from conducting any lottery drawing for the distribution of a prize or prizes by lot or chance, or advertise any such lottery scheme or device in any newspaper or by circulars, posters, pamphlets, radio, telegraph, telephone, or otherwise.

A "lottery drawing" is the selection of the winner by chance. It is not essential for conviction that the defendant had any other interest or participation in the lottery

This crime is ranked level 1 out of 10 under the Florida criminal Punishment Code. It is a third-degree felony punishable up to 5 years in prison and a $5,000 fine.

This crime prohibits aiding or assisting in the setting up, promoting, or conducting of any lottery or lottery drawing, whether by writing, printing, or in any other manner whatsoever, or be interested in or connected in any way with any lottery or lottery drawing. As you can see, this is a very broad crime and pretty much capture anyone that was not captured from previous paragraphs.

This crime is ranked level 1 out of 10 under the Florida Criminal Punishment Code. It is a third-degree felony punishable up to 5 years in prison and a $5,000 fine.

This paragraph seeks to prevent the lower level agents or employees from selling tickets for the organizers. These individuals might be innocent and were duped by the people organizing the lottery that it was for charity and everything was legal. How many young people would question their boss or bother to find out if everything was being done legally?

A "lottery ticket, coupon, or share" could be a piece of paper, a token, or something that represents the right of the possessor to receive the lottery prize. The ticket doesn’t have to explain the rights of the possessor, but could just be familiar to those playing that particular lottery that the possessor has the rights.

The reasoning behind this crime is it wants to punish those that are assisting in the lottery. The big problem with this crime is that individuals can get tricked into buying these tickets for what they are told is a legal charity raffle. There is no intent requirement but only a possession requirement for this first-degree misdemeanor. What happens when your friend buys you a ticket and hands it to you? You could be potentially arrested.

This paragraph seeks to prevent individuals from working as book keepers for lottery organizers. A lottery needs to keep records such as run down sheets, tally sheets, or other types of documents to keep the lottery organized. Everyone can’t be a winner and they have to figure out who has what ticket.

Depending on the facts of the case, racketeering charges can be brought under Florida Statute 895.02(1)(a)45 for people running gambling operations.

These charges can be defended. Call our law offices today to schedule a free 15 minute case strategy. It is important that we know all the facts. We need you to tell us what happened. This information will be critical to putting together a defense strategy for your case. Our Boynton Beach Illegal Lottery Lawyers will find out what evidence the prosecutor has against you and what the police officers observed. After gathering this evidence, we can either keep negotiating with the prosecutor to drop the case or we can file a motion to dismiss and argue your case to the judge. We can take the case all the way to trial, if you want. Call today so we can start helping you.