Cannabis has so many names for marijuana: a blunt, some bud, candle, chiba, dope, dube, gange, ganja, grass, green bud, pot, reefer, a roach, shake, a nugget, trees, weed and so many others. The law calls it marijuana. Although scientific studies are continually confirming the many medical benefits that arise from medical marijuana, the police are still arresting people for Possession of Marijuana. Being charged with weed seems like a joke. It’s not. It has consequences in Florida.

Possession of Marijuana less than 20 grams is a first-degree misdemeanor punishable by up to one (1) year in the county jail per Florida Statute 893.13(6). It also has a maximum fine of $1000. If convicted your driver’s license will be revoked for one (1) year. Possession of Cannabis/Marijuana under 20 grams is the only substance in Florida that is labeled as a misdemeanor. Whether the police find a few flakes on the carpet of your automobile or several grams of weed in a baggie, they can and will charge you.

Weed has a distinctive smell and if police can smell it they can search it. That is what the Supreme Court says, not just Florida but everywhere in the United States. That means they, the police, can search your person, your belongings, your car, etc. In Palm Beach County, the Palm Beach Sherriff’s office, or local police, can stop you for various reasons but most cases involve motorists that are speeding, have dark tint, or are violating some type of traffic control device such as stop light or stop sign. If the stop is legitimate and the police can smell it then they will likely find it. If arrested contact marijuana defense attorneys in Palm Beach County.

There are two ways to police can arrest you for Possession of Marijuana under 20 grams and it is in the discretion of the police officer. Police can physically arrest you, take you down to the jail and photograph and fingerprint you or they can legally arrest you and give you what looks like a traffic ticket/citation. This ticket is referred to as a “Promise to Appear” or “Notice to Appear.” You must sign it. Signing the Notice is your acknowledgement that you have legally been arrested for possession of marijuana under 20 grams. and your signature is your guarantee to the court that you will appear at a designated courthouse on a date and time. If you have received a Notice to Appear then contact West Palm Beach Cannabis Defense Attorney, Roger P. Foley.

Regardless of what court house you are assigned for your possession of marijuana or possession of drug paraphernalia we will be able to help you. Attorney, Roger P. Foley has been serving Palm Beach County, Broward County and Martin County for many years.

Possession of Drug Paraphernalia consists of things like baggies, grinders, bong, one hitter, rolling papers, etc. Anything that can be used to ingest marijuana can arguably be paraphernalia. These items are sold in stores legally yet you can be charged with this first-degree misdemeanor if you possess it.

Possession of Marijuana with Intent to Distribute is charged when the government believes that your actions demonstrate that you are selling marijuana. For example, they catch you selling to undercover, or less obvious when you have several baggies or a scale, or simply the way the weed is packaged. This charge is not eligible for drug court.

Cultivation- growing cannabis. You are found in possession of trees. Under 24 trees and you are looking at a cultivation charge which is a third-degree felony. 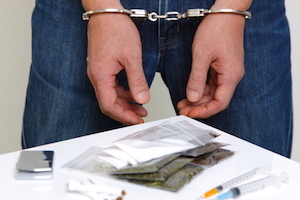 Remember, drug crimes can violate both federal and state laws. All controlled substances are classified by drug schedules, depending on the accepted medical use, potential for addiction, and potential for abuse. If you or someone you love has been charged with marijuana possession, delivery of cannabis, cultivation of marijuana, or trafficking of marijuana / cannabis in Palm Beach County, contact West Palm Beach Marijuana Possession Attorney, Roger P. Foley. The Law Offices of Roger P. Foley may help you with your current drug charges, or more specifically, your marijuana drug charge. We have extensive experience dealing with drug offenses in Florida.

Any drug conviction can result in a driver's license suspension for up to 2 years. Possession of more than 25 pounds of marijuana is classified as drug trafficking.

Contact a West Palm Beach Marijuana Possession Attorney at The Law Offices of Roger P. Foley for aggressive defense of your rights.