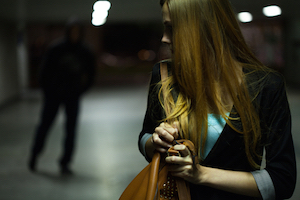 The prosecutor must prove beyond a reasonable doubt:

Robbery is where an individual uses force or threats to take property from another person. This could be strong arm robbery where the robber uses his strong arm to rip the property away or robbery with a deadly weapon or firearm where they scare the person into giving them the property. Robbery by sudden snatching does not even require force against the person, but only the amount of force that is necessary to obtain the property.See Florida Statute 812.131(1)(a); see also A.M. v. State.

This statute is designed to prevent “the horror of a victim who is conscious of the startling seizure of something from her hand or person” and not from the property that is close by from being plucked. See Wess v. State. For example, taking a cellphone from a hand, A.M v. State, would be robbery by sudden snatching while taking a purse that is next to the person on a park bench is not. See Brown v. State.

The prosecutor does not have to show that “[t]here was any resistance offered by the victim to the offender or that there was injury to the victim’s person.” See Florida Statute 812.141(1)(b).

What happens if the robber did not get away with the property because he dropped it? The state prosecutor only has to show that the victim was aware of your failed attempt to take the property, not that you actually took the property.

The statute requires that the victim became aware of the robber’s attempt to take the property. A person who was a pick-pocket or other type of stealthy/sneaky criminal might not be able to be charged under this crime but under petit theft if the property was under $300. Changing the criminal charges to petit theft might not seem like a win, but it could be wise in certain situations because a petit theft conviction is at worst a first-degree misdemeanor which is punishable up to 365 days in jail and a $1,000 fine as opposed to a third-degree felony which is punishable up to 5 years in and a $5,000 fine. You will need to talk to an attorney to figure out what the best strategy to defending your case will be.

Furthermore, if your charges are changed to petit theft and the prosecutor does not prove the value of the property, then you could only be convicted of a second-degree misdemeanor which is punishable up to 60 days in jail and a $500 fine.

Punishment for Robbery by Sudden Snatching

There are many facts that need to be considered to properly evaluate your case. Call our office to schedule a free 15 minute case strategy with one of our attorneys to tell us your facts. Our attorneys focus on criminal matters in the South Florida area and can explain to you your available legal defenses. We can negotiate with the prosecutor to drop your case before charges are even filed or we can argue to the judge to dismiss your case. We will strive to resolve your case as quickly as possible so you have the best outcome. Call today to meet with one of our attorneys.